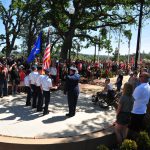 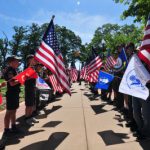 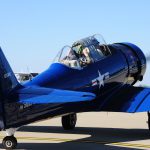 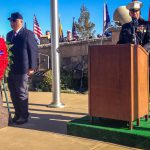 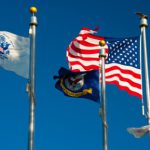 Memorial Day ceremonies will not be held at the El Dorado County Veterans Monument on Monday, May 25, 2020.

In their place, a pre-recorded ceremony will be broadcast at 1100 hours on Channel 2 (Sierra Community Access Television) and on the following Facebook pages:

“The uncertain end-date of California’s current Covid-19-induced ‘stay-at-home’ edict interfered with planning a respectful Memorial Day ceremony. That, and concerns that many of those who attend are senior and would be put at risk should the pandemic persist through Memorial Day, made it imperative that we find another way to honor our nation’s fallen warriors,” explained Gary Campbell, president of the EDCVA.

Campbell said, “El Dorado County has the highest percentage of residents having served in the U.S. Armed Forces of any county in California. Veterans represent under two percent of the nation’s population, but here they comprise ten percent of county residents.

“That explains why so many El Dorado County residents attend our Memorial Day and Veterans Day ceremonies each year. We get some 1,500 people at them, partly because El Dorado County’s are among the most elaborate, militarily correct and well-attended veterans commemorations held in California.”

He continued, “This year’s abbreviated ceremony will honor America’s fallen warriors with a flag ceremony, pledge of allegiance, presentation of a wreath and appropriate remarks. Participating will be veterans from all branches of the U.S. Armed Forces, assembled from the county’s many veterans organizations.

“We truly regret that the conditions of the pandemic required this decision and encourage the public to stay safe and honor America’s fallen warriors by watching the ceremony on Channel 2 or Facebook. The Veterans Monument grounds will remain open on Memorial Day for those who intend to pay their respects to our county’s veterans, though we ask all who visit the El Dorado County Veterans Monument to maintain a ten-foot social distance,” concluded Campbell.