Honors and Assists those veterans who have served the Cause of Freedom.

Maj. Kurt Chew-Een Lee grew up in Sacramento and was the first Asian American officer in the U.S. Marine Corps and a decorated Korean War hero.

Maj. Lee was a gung-ho Marine who gave no ground to enemy troops in battle or to bigotry at home. The firstborn son of Chinese immigrants, he climbed the ranks during a time of strong racial prejudice.

Standing only 5-foot-6, he was nevertheless an imposing figure with a wiry, muscular build and an intimidating gaze. He demanded that subordinates who did not respect him must nevertheless respect his rank.

Lee was a young, skinny lieutenant at the start of the Korean War who earned the respect and loyalty of his men as a fearless leader in extreme combat conditions. He received the Navy Cross, the Marines’ second-highest honor, for bravery during a fierce assault by Communist Chinese forces aiding the North Koreans on the night of Nov. 2-3, 1950.

To spur his men to fight, he took off in the darkness on a one-man raid and exposed himself to fire to pinpoint enemy positions for attack. Shouting in Mandarin to sow confusion, he hurled grenades and shot at Chinese troops, who fled. Wounded in the knee, he was shot the next day by a sniper and treated at an Army field hospital.

Unwilling to be sent to Japan for treatment, Maj. Lee took a Jeep without approval and drove with another wounded Marine to rejoin their platoon in Baker Company of the 1st Battalion, 7th Marine Regiment. He was assigned to help relieve a Marine division that was encircled by overwhelming enemy numbers while trying to defend their only escape road in the bloody Battle of Chosin Reservoir in December 1950.

Guided only by a compass in pitch-black darkness, he led 500 men through a nighttime blizzard over mountainous terrain at 20 degrees below zero. Pinned under intense enemy fire, he ordered his men to fire while advancing up a steep hill and shot two enemy soldiers along the way with his right arm still in a cast from his sniper wound. The ferocity of the Marine attack broke the resistance of enemy troops, who fled down the reverse slope.

Maj. Lee suffered another bullet wound in his right arm during the successful operation, which enabled 8,000 Marines to escape annihilation by 60,000 Chinese troops. Several days later, he was hit by machine-gun fire that ended his combat service in Korea. Although he received the Silver Star – the third-highest medal for bravery in combat – fellow Marines and other veterans who have studied his actions during the attack have argued that he deserved the highest award, the Medal of Honor.

After the Korean War, Lee served at The Basic School, a Marine officer training program, from 1962 to 1965. He was promoted to the rank of major in 1963 and was a combat intelligence officer in Vietnam. Besides the Navy Cross and Silver Star, he received a Purple Heart with one award star and other military honors.

The story of his gallantry in Korea has been covered in several books and was the subject of a 2010 Smithsonian Channel documentary, “Uncommon Courage: Breakout at Chosin .” in Korea. 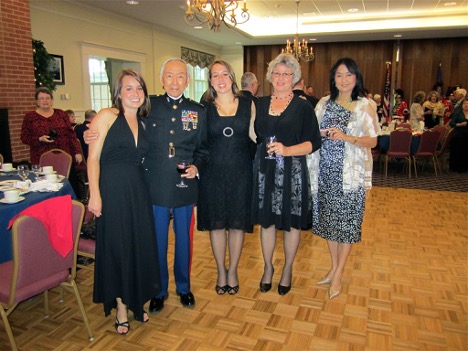 WELCOME HOME STATUARY
Welcome Home is life-sized bronze statuary that will portray a joyous return from duty for two El Dorado County members of the U.S. Armed Forces. It is the welcome that every service member looks forward to receiving upon returning home from duty.

Running joyously toward them is a bronze Labrador retriever, symbolic of the joy that family and friends have over the return of their service man or woman from duty. It also represents the welcome that some service members never got, but which through the statuary will never end.

The statuary was conceived by the El Dorado County Veterans Alliance and was designed by famed sculptor of military themes and figures, Rip Caswell. It is planned to be placed on the lawn to the left of the entrance walkway at the El Dorado County Veterans Monument (“W” on the map key). It will be the first personification of the veteran experience at the EDC Veterans Monument.

To contribute to the effort to fund creation of the statuary, CLICK HERE. All donations are tax deductible.

For more about the statuary, email memorials@eldoradocountyveterans.org.

VETERANS DAY
Each Veterans Day (November 11) at 1100 hrs, ceremonies are held at the El Dorado County Veterans Monument in Placerville (360 Fair Lane). The ceremonies honor the service of all veterans and include a fly over by WWII Warbirds, color guard ceremony, parade of flags by veterans organizations and youth groups, speeches by public officials, patriotic music, presentation of Veterans of the Year and Veterans Service and Support awards, wreath presentation, a three-volley rifle salute, taps and a piper playing Amazing Grace.

MEMORIAL DAY
Each Memorial Day (last Monday in May) at 1100 hrs, ceremonies are held at the El Dorado County Veterans Monument in Placerville (360 Fair Lane). The ceremonies honor those who died in the service of their country and include a fly over by WWII Warbirds, color guard ceremony, parade of flags by veterans organizations and youth groups, speeches by public officials, patriotic music, presentation of Veterans Monument Scholarships to children of veterans, wreath presentation, a three-volley rifle salute, taps and a piper playing Amazing Grace.

SALUTE TO VALOR
Each autumn, Snowline Hospice Thrift Stores honor veterans by holding a "True Up" sale in which the difference between the sale price and rounding up to the next dollar is donated to help El Dorado County veterans. Called "Salute to Valor" the sale raises funds to help vets study at local colleges and trade schools, provide chaplaincy services to veterans in law enforcement, and otherwise help veterans in need.

CAPT PAUL JACOBS FUND
Honoring El Dorado County's CAPT Paul Jacobs, USN who rescued 32,000 Vietnamese sailors and refugees from death and imprisonment in the final moments of the Vietnam War (considered to be the greatest humanitarian event in US Navy history), this fund provides help to members of the crew of CAPT Jacobs' ship, USS Kirk (FF 1087), and their families, so that what they did rescuing the defenseless is never forgotten.